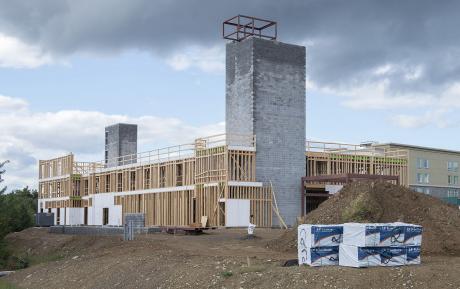 The Westview South complex along Buckeystown Pike is expected to add a Baltimore-area pit beef restaurant, as the property continues to add commercial tenants and its developer seeks to alter the makeup of residential construction on the site.

The property has about 6,000 square feet left to fill out of about 22,000 square feet of retail space in two buildings, said Brad Benna, who leases properties on the site for the Matan Cos., which is developing the project.

The site is along Buckeystown Pike, south of the larger Westview development that’s home to the Regal Cinemas Westview 16 & Imax movie theater, as well as other businesses.

The restaurant, which offers pit beef and other sandwiches, has locations in Baltimore and Aberdeen and was featured on the Food Network show “Diners, Drive-Ins and Dives.”

The Westview property is “a major upcoming area,” said Donna Creager, who owns Chaps with her husband, Bob.

While they run the two current restaurants, the Frederick location will be the first franchise they’ve sold, Creager said.

She said she believes their exposure on the Food Network has helped spread the popularity of pit beef beyond its regional roots.

Meanwhile, construction is continuing on an expansion of a Homewood Suites by Hilton hotel onto a lot adjacent to its location, with the hotel scheduled to expand from 117 to 250 rooms.

Company representatives could not be reached for comment Monday.

Matan is also looking to change the mix of residential construction planned as part of the project.

The Frederick County Planning Commission is scheduled to consider a request from Matan on Wednesday that would eliminate four 32-unit buildings and add 24 town houses and 46 condominiums.

The proposal would reduce the number of homes in the development from 600 to 542. If approved, it would consist of 116 detached houses, 184 town houses, 146 condominiums, and 96 multi-family units along Executive Way, near New Design Road.

The Westview South project also includes about half a million square feet of employment space, which could have a variety of business uses.