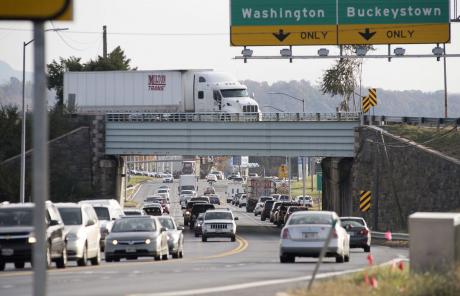 A $65 million project at the interchange of Interstate 270 and Md. 85 will get started in the coming weeks, as crews replace two structurally deficient bridges and widen part of Md. 85.

The project will add an extra lane to Md. 85 in each direction from Spectrum Drive to just north of Crestwood Boulevard and add a new median and Americans with Disabilities Act-compliant sidewalks and ramps. It will also replace two bridges for I-270 over Md. 85 with one three-span structure.

Crews have already started some preliminary work on the project, and people should start seeing workers on the site after Thanksgiving, said State Highway Administration spokesman Charlie Gischlar.

Once the project gets further along, drivers will see some single lanes closed on Md. 85 and traffic lane shifts on I-270, he said.

Gov. Larry Hogan (R) announced the start of the project in a news release on Wednesday.

“This interchange project is critical for Frederick County residents, motorists, and business owners who spend too much time in traffic every day,” Hogan said in the statement.

The $65.5 million project will be done in phases by contractor Joseph B. Fay Co., of Glen Burnie. Crews will begin improvements to I-270 in November.

The project is expected to be finished in late 2020.

Built in 1950, the bridges carry 115,000 vehicles a day, according to the State Highway Administration.

They were identified in 2015 as two of the 69 structurally deficient bridges in the state.

In September, Hogan announced $9 billion worth of projects that would add lanes to I-270, Interstate 495 around Washington, D.C., and the Baltimore-Washington Parkway.

The project would widen the Maryland side of I-495 by four lanes, and widen I-270 from Frederick to where it meets I-495.